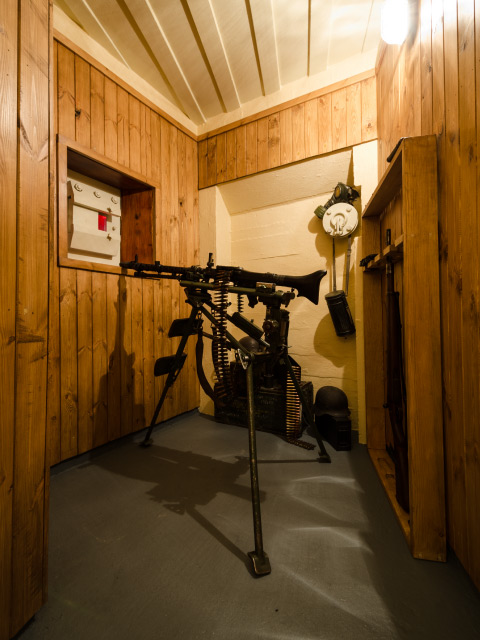 This Bunker is one of three identical constructions all having being built by the Organisation Todt prior to 1st July 1943, this one designated as N22 on the Baufortschrittsmeldung (Building Progress Report) by FestPiStab Abschmitt Gruppe11/14 (Fortress Engineer Sector Group 11/14), N17 being at Mont Rossignol & N2 opposite Rue Du Trot at Maufant.

This is the only accessible 617 of the three built, the N2 being flooded & the N17 being buried. Fortress built having walls & ceiling of two metres thick, the length being 17 metres & width being 12.80 metres it consisted of 850 cubic metres of reinforced concrete, 41 metric ton of Bar Steel & 6.45 metric ton of Soffit Steel & would have taken approximately 3 months to complete.

The telephone exchange bunkers were built at priority points within the telephone network. Normally the Wehrmacht planned 3 telephone bunkers for a Divisional area; from these bunkers any problems with the underground cable network could be solved.

Approaching the (1a) Haupteingang (main entrance) you are confronted with the Eingangsverteidigungsscharte (exterior flanking entrance defence loophole),which in most cases contained the MG34 machine gun. Entering from the Gittertür Type 491 P2 (grill gate) steps lead down into the bunker, on the facing wall there should have been another Defence Loophole to cover the stairway, this enabled the gunner to fire through the grill gate, the hole was in place but the Panzerscharte Type 48 P8 (entrance defence armoured plate) were not emplaced in all of the three bunkers. There is a drainage point to your right & to your left you have the Panzertür Type 434 P01 (armoured door in two halves) leading into the (2) Gasschleuse (gaslock), this room could be pressurised against gas attack, you will notice the mains for the electricity supply entered here.

Either side of this door are the shafts for the Antennen (antenna). To your left is another Panzertür Type 434 P01 (armoured door in two halves) leading into the (3) Nahkampfraum (close combat defence room) where the MG34 machine gun was positioned, this being clad in wood so as to absorb any stray bullets or shrapnel that may enter from the loophole. To your right is a Gastür Type 19 P7 (Gas Door) leading into the (4) Bereitschaftsraum (crew room) in this room you will find the Notausgang (escape shaft) at (5) this having a gas proof door Type 410 P9, there would have been two sets of steel girders emplaced in recesses with a brick wall behind them & half filled with sand to stop anyone entering from the shaft. This not being a quick exit but if needed it was the only way out if the entrance would have been obstructed. Next to this was a gas proof/blast proof solid fuel stove Type Wt 80K, this had gate valves which would kill off the fire & close the chimney in the event of an attack. The stoves were usually located close to the escape shaft so that, should a hand grenade be thrown down the chimney it would be diverted via a T- junction into the shaft where it would explode harmlessly.

The walls were originally wood clad or fibre boarded & the floor covered with damp proofing tiles. There were nine bunks in here, three rows of three suspended from hooks from the ceiling & with hooks on the wall to accommodate the nine soldiers. A 2.4 cubic metre per minute Heereseinheitsschutzlüfter (army standard protective ventilator) was fitted on the wall far right, it could operate on the mains supply or manually operated, it enabled filtered air into the bunker & pressurised all the rooms against gas attack, gas proofing was achieved by creating an ‘over pressure’ in the bunker, the air pressure being slightly higher than the natural air outside.

All this being maintained with the help of the ‘over pressure valves’ you see around the bunker recessed in the walls, a telephone was also attached to the wall in this room to maintain communication with the outside.

Another Gastür Type 19 P7 (gas door) on your right leads into (6) Vermittlung (liaisons), this room being used for communication purposes, and to your right (7) Unteroffiziersraum (Non Commissioned Officer) the N.c.o had his own room away from the other ranks. To your right in the far corner is (8) Schaltraum (switchboard room) this is where all the wiring & connection boxes were contained.

The (1b) Nebeneingang (second entrance) leads you into (9) Kabelraum (cable room) used for the storage of cable drums and handcarts and (10) Laderaum (charger room) being used for the charging of the batteries for emergency use.

More info on The Bunker

This site uses cookies to improve your experience. Read more.